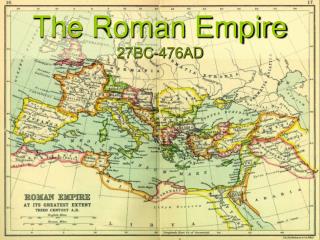 27 B.C. - Chronology of the roman empire. senātus populusque rōmānus &quot; the senate and people of

Age of Augustus and the Early Roman Empire - . a. the age of augustus. julius caesar’s grandnephew, octavian became

Roman Empire - . the early empire life in ancient rome the fall of rome. what did augustus achieve?. for centuries the

The Roman Empire By Joseph Enge - . i. around 750 bc a small settlement was established where the city of rome, italy

The Roman Empire - . from julius to nero. learning goals. by the end of this lesson i will know the major differences

Aim: How did Augustus bring peace to the Roman Empire? - . do now: based on the activity we did on friday, do you think

The Fall of the Roman Empire - . the dark age begins. causes for collapse. antagonism between the senate and the emperor

The Roman Empire - . what i know or want to know select 4 people/terms write a statement or question about each. people

ancient Rome: From THE roman Republic TO THE ROMAN empire TO THE FALL OF ROME - . aim: how did ancient rome rise and