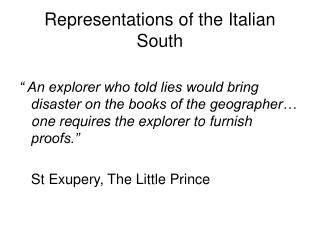 Representations of the Italian South

Representations of the Italian South. “ An explorer who told lies would bring disaster on the books of the geographer… one requires the explorer to furnish proofs.” St Exupery, The Little Prince. Research. Research questions : How is the South of Italy represented? How can we explain this?

Representations of the Italian South

Regionalism and Representation University of Warwick 04.26.2013 The Sardinia case: - Issues of memory and identity in

National Unification - . italy and germany. in 1848-1849, the liberal nationalists had been defeated in their efforts to

The Berlusconi Case in Italy. Changes of the political discourse in the late western democracies - . fausto colombo

Introduction to Italian History and Culture - . the italian society: past and present. the paradoxes of the italian

Where is the Industrial Triangle in Italy? - L.o: to know what the industrial triangle is and where it is. to know why

The Unification of Italy - . hwh unit 7 chapter 10.3. the kingdom of sardinia. the main characters. count cavour (the

Introduction to Italian History and Culture - . the italian society: past and present. the paradoxes of the italian