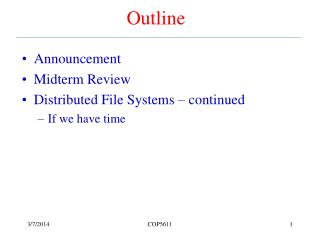 Outline Announcement Midterm Review Distributed File Systems – continued If we have time Announcements Please turn in your homework #3 at the beginning of class The midterm will be on March 20 This coming Thursday It will be an open-book, open-note exam Operating System