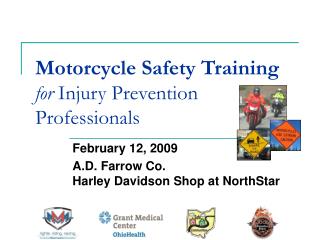 Safety &amp; Injury Prevention - . chapter 2 sections 1,2,3. should i have a medical screening before starting a

BACK INJURY PREVENTION TRAINING - . by. sumith wijeweera. lifting and your back. preventing back injury. back

Motorcycle Injury Compensation: - If you are injured during the ride a motorcycle, you may be able to claim compensation.

Back Safety and Lifting Injury Prevention - . university of n orthern c olorado. how to move forward/backward when

Motorcycle Safety - . by all of us. introduction. the reasons there are too many serious motorcycle accidents in

MOTORCYCLE SAFETY - Motorcycle safety. statistics. in 1999, 41% of all motorcyclists involved in an accident were