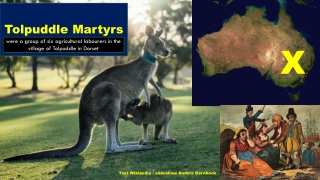 History about the Tolpudle Martyrs

Martyrs - Three warning angels. fear god…. and i saw another angel fly in the midst of heaven, having the everlasting

Era of Martyrs - . church history. nero 37-68 ad the fire at 64 ad. executed christians for their alleged involvement in

CLARETIAN MARTYRS OF BARBASTRO - . tomorrow, august 14, we will die martyrs. keep in mind that we die on the eve of the

Martyrs, Kings, and Fathers - . confessors and the lapsed. septimius severus (r. 193-211). became emperor after a period

Thecla and the Virgin Martyrs - . thecla. from apocryphal (outside the scriptures) books extremely popular 2 nd century

The Monument of The Sakarya Martyrs - . european culture through art&amp; research , turkey , 2014