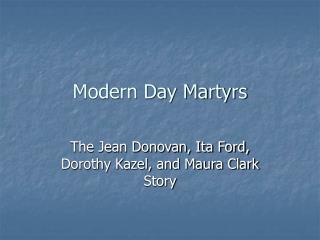 Martyrs - Three warning angels. fear god…. and i saw another angel fly in the midst of heaven, having the everlasting

Tolpuddle Martyrs - History about the tolpudle

Modern-day genocide - . the past repeats itself. history of the word “genocide”. in 1944, a polish-jewish lawyer

Modern Day Slavery - . ….following our conscience and doing what is right? . slavery…. we learn about the nazi

Modern Day Knight - . characteristics. being driven by character is what makes a modern knight. these people: do right,

Modern day questions - . homosexuality. what is the problem with homosexual practice? can you be a homosexual and a