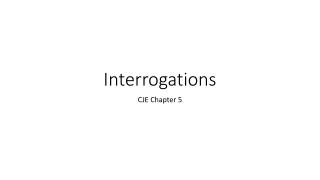 The historical departure from physical abuse to psychological manipulation is discussed with an eye toward denying that any strong form of interrogation technique is unethical.

HOW (UN)ETHICAL ARE YOU? - . banaji, bazerman,and chugh. being “ethical” or “unethical”. self-perception is often

Chapter 5 Psychology and Crime - . chapter objectives (1 of 3). understand the difference between psychiatric and