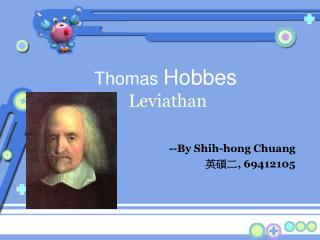 Thomas Hobbes : Leviathan - . the life of a man would be solitary, poor, nasty brutish and short. notes on virginia: saw

Hobbes and the Leviathan - . 1651. hobbes’ question. how is social order possible? foundation of western political

Thomas Hobbes - . enlightenment philosopher:. lived during a time of upheaval in england:. born on the day the english