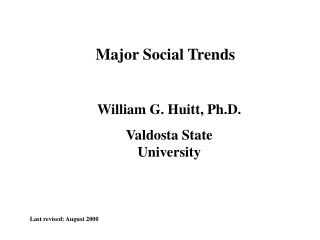 SOCIAL TRENDS - . social trends- large scale changes in our society such as an increase in immigration, decrease in

Major HR Trends: 2019 - Time cruises by, we say goodbye to the past and welcome another year. this is when associations

Major Trends in Evolution - . microevolution . small changes over time in the allele frequencies within a species which

SOCIAL MEDIA TRENDS - Social media platforms have become a part of our daily lives. from facebook to twitter, linkedin,

What are the Major Social Media App Development Trends for 2021? - To build social media apps in 2021, you need to unlock

Major perspectives in social science - . functionalists observe functions and role of the society and it’s elements

Major Social Institution: The Family - . the family is one of nature's masterpieces.  ~ george santayana,  the life of