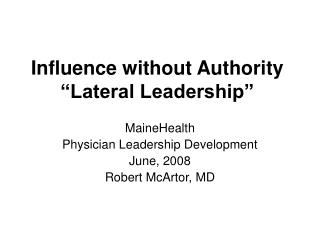 Chapter 11 Group Influence and Opinion Leadership - . by michael r. solomon. consumer behavior buying, having, and being

Factors that Influence Obedience to Authority - . milgram (1965) followed up the famous study on obedience to authority (

Leadership Power and Influence - 2. power and

Leadership Power and Influence - 2. chapter objectives. recognize your natural leadership frame of reference and how you

Leadership Power and Influence - . “if a man can accept a situation in a place of power with the thought that it’s

Lateral - . head in lateral position, with the affected side nearest the bucky. mandible and the occiput not

Agent acting without or exceeding its authority - . will the contract of purchase-sale bind the principle?. the principle

10 Strategies for Christian Influence/Leadership - . how to increase flavor and shine brighter, #7, control conflict.

10 Strategies for Christian Influence/Leadership - . how to increase flavor and shine brighter, #8, lighten up. we have