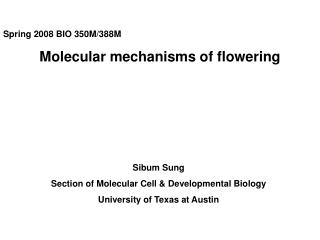 Spring 2008 BIO 350M/388M Molecular mechanisms of flowering Sibum Sung Section of Molecular Cell & Developmental Biology University of Texas at Austin When to flower is a matter of the survival of species Floral transition (Aukerman and Amasino, 1998)

Sexual Reproduction of the Flowering Plant - . learning objectives (1/4). state the structure &amp; function of the