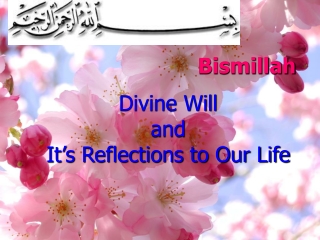 Bismillah - . divine will and it’s reflections to our life. god (allah) revealed messengers day of the judgment

Bismillah - . in the name of god. important reminders from previous classes. 7  billion people live in the world.

Virtues of Bismillah - . source. courtesy: www.everymuslim.com. click for next slide. incidents relating to bismillah. an