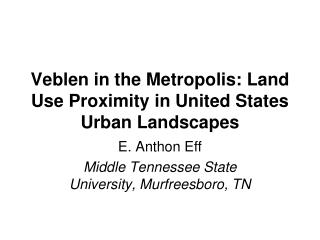 Veblen in the Metropolis: Land Use Proximity in United States Urban Landscapes

Veblen in the Metropolis: Land Use Proximity in United States Urban Landscapes E. Anthon Eff Middle Tennessee State University, Murfreesboro, TN Why no pawn shops in shopping malls? No liquor stores near churches? No adult bookstores near schools? No nursing homes near cemeteries?

Veblen in the Metropolis: Land Use Proximity in United States Urban Landscapes