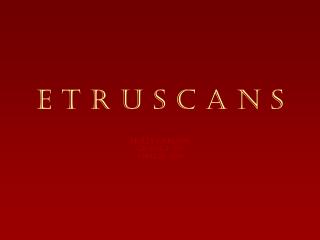 Discovering Etruscan and Greek Influences on Roman Civilization - . introduction you will be viewing a series of slides

Etruscan Heritage and the Rise of the Roman Republic - . moving west in the mediterranean world. etruscan heritage and

The Rise of the Roman Republic - . ii. the etruscans and rome (750-509 bce). early romans and their different neighbors

Etruscans - . period 6. government by shannon beauregard and connor o'brien the etruscan government was a theocracy a

The Etruscans - . by keenen maguire. somewhere between 900 and 800 bc, the italian peninsula was settled by a mysterious

Etruscan - Their cities were built on hilltops and surrounded by thick walls . they loved music and dancing like sounds

Etruscans Caricature - The etruscans wore heavy leather shoes that were firmly around their ankles for better footing.

Italy’s First Civilization - Rise of rome and the influence of the etruscans. italy’s first civilization. the

FIRST ROMANS - . ancestors of romans migrated into central italy around 1000 bc settled near ford in the tiber river

Discovering Etruscan Influences on Roman Civilization - . introduction you will be viewing a series of slides that

Gardner’s Art Through the Ages, - . chapter 9 the etruscans. italy in etruscan times. people who inhabited the central