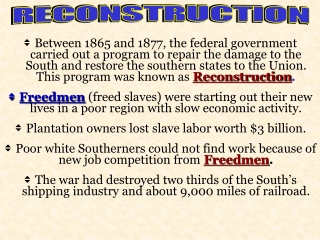 R E C O N S T R U C T I O N. Between 1865 and 1877, the federal government carried out a program to repair the damage to the South and restore the southern states to the Union. This program was known as Reconstruction . I n t r o d u c t i o n s - Programmers are from mars, customers are from venus: a practical guide to working with