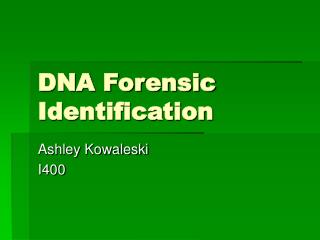 Forensic DNA Analysis (Part II) - . summary. what is dna?. where is dna found in the body?. how does dna differ among

DNA Forensics - . dna forensics deals with the use of recombinant dna technology on one or more biological specimens for

The application of DNA technology in Animal Forensic and Parentage Determination - . presented by: ms. n. mapholi (msc in

Forensic DNA Analysis - . microarrays in action. forensic dna analysis. every cell in our body contains a copy of our

Chapter 13 DNA Fingerprinting and Forensic Analysis - . forensic science is the application of science to law previous

Introduction to Forensics - . chapter 1. forensics. what is forensic science? what are some of the major analysis areas

The History of DNA Forensics - . april 18, 2005. what is dna?. dna is the chemical substance which makes up our

Forensic DNA Analysis - . what is dna profiling?. ”the use of molecular genetic methods to determine the exact genotype

Chapter 8 DNA Fingerprinting and Forensic Analysis - . forensic science is the application of science to law previous