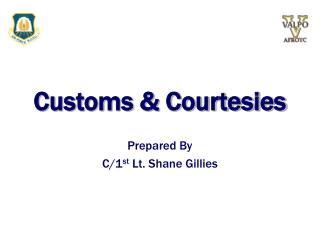 Immigration and Customs Enforcement - . deaths in ice detention centers: a system shrouded in cover-up and

Traditions and Customs of The United States of America - . thanksgiving. presentation by: joseph lin economic officer

Advance Customs Rulings - . international rules. what is an “advance ruling”. a written decision issued by customs at

Customs of Afghan Weddings - . by laura beasley. how to choose your mate. you do not get the option to date you do not

Australian Culture &amp; Customs - . welcome to australia these are just some of the customs and culture aspects of

DRAWBACK OF DUTY CUSTOMS ACT, 1962 - . drawback means refund of custom duty and excise duty that are chargeable on

Military Customs and Courtesy - . greetings. each usphs commissioned officer (co) has a grade/rank/title. the rank/grade