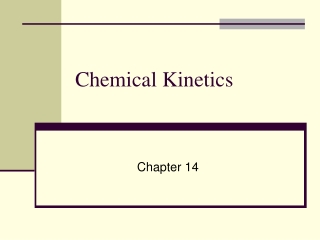 Chemical Kinetics - . how are chemical reaction rates determined and what factors affect these rates?. objectives. to

Chemical Kinetics - . rates of chemical reactions. diamonds are made by converting carbon from its graphite state. takes

Chapter 13 Lecture 1 Chemical Kinetics - . kinetics = the area of chemistry that is concerned with reaction rates . what