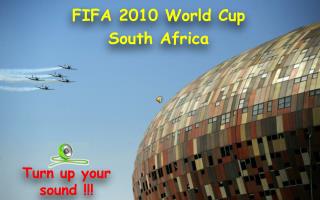 FIFA 2010 World Cup South Africa Turn up your sound !!! Tens of thousands of South Korean fans celebrate after watching a broadcast of their 2010 World Cup match against Nigeria in Durban in downtown Seoul. Police said 500,000 fans filled the streets nationwide to watch the game. THE END

2010 FIFA World Cup - . by: ahmed al minsad. i ntroduction. my best player was david v illa and he was playing in spain

2010 FIFA WORLD CUP - . the challenges facing local government in the preparation for 2010 world cup and beyond.

Fifa world cup 2010 - . by reem addam. choose a fifa world cup competition to research and communicate when and were the