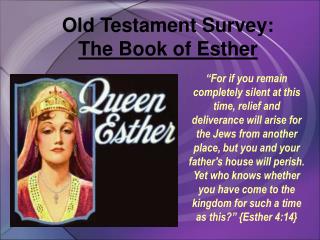 Old Testament Survey: The Book of Esther. “For if you remain completely silent at this time, relief and deliverance will arise for the Jews from another place, but you and your father's house will perish. Yet who knows whether you have come to the kingdom for such a time as this?” {Esther 4:14}.

NEW TESTAMENT FOUNDATIONS NT 102 THE CHURCH &amp; THE FUTURE - . jude introduction 1. are among the most neglected of

The Causes of Survey Mode Differences and Their Implications for Survey Design - By don a. dillman thomas s. foley

Course: Old Testament History Genesis (1-11) From Adam to Nimrod and the Tower of Babel - Text: ‘all scripture is