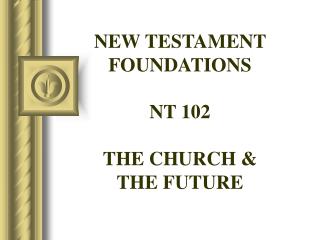 NEW TESTAMENT FOUNDATIONS NT 102 THE CHURCH & THE FUTURE. JUDE Introduction 1. Are among the most neglected of NT books. 2. Bear the closest literary relationship with II Peter. Two primary issues A. Who wrote Jude? The future of fresh expressions - . cliff college. the journey so far. a groundswell of experimentation emerging church

Illinois General Assembly of the Church of God 08 February 2014 - . the church of god: changing. changing the world. the

Doctrine of the Church - . the church is a term which designates a totally unique group of believers who at the moment of

FCOP AFRICA - . the start of the journey. worn out. almost there. here it is. pastor lawy and easter. inside the church.

Leadership Will Determine the Future of God’s People - . many old testament warnings bear this fact out. (jer 6:13-15).