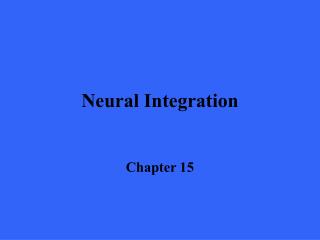 Neural Integration. Chapter 15. Introduction. Through the chapters covered to date we have looked at the nervous system from its component pieces However, our nervous system typically acts as an integrated whole, gathering sensory inputs, processing information and effecting a motor response

Neural Communication - . biological psychology branch of psychology concerned with the links between biology and behavior

Neural transmission - . the reticular theory vs the synaptic theory. the “resting membrane potential”. ions are