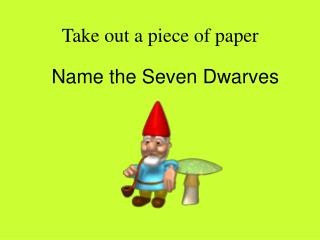 Name the Seven Dwarves . Take out a piece of paper. Difficulty of Task. Was the exercise easy or difficult. It depends on what factors?. Whether you like Disney movies how long ago you watched the movie how loud the people are around you when you are trying to remember.

The Mythology of Discworld - . the disc. hindu cosmology has four or eight great elephants called the diggaja , elephants

Unit 2: The Sun and Other Stars - . objective: e5.2e - explain how the hertzsprung-russell (h-r) diagram can be used to

The Hobbit - . week 1 and 2 analyze how particular elements of a story or drama interact (e.g., how setting shapes the

The Graveyard Book by Neil Gaiman - . a visual dictionary chapter 3. talon p. 74. mackintosh p. 66. the sharp claw of an

The most common type of gladiator was probably the Samnite warrior who was the heaviest armored gladiator.

Unit 1.2: Characteristics of Stars - . guiding questions for this unit:. what two forces must be balanced for a star to

Walt Disney - . the man who shaped generations. “the way to get started is to quit talking and start doing .”. walter

E.A. Channon, Author of Flesh of the Blood - 1888 press release - the noted bagpiper-turned-author e.a. channon will