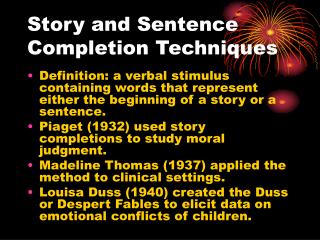 Story and Sentence Completion Techniques. Definition: a verbal stimulus containing words that represent either the beginning of a story or a sentence. Piaget (1932) used story completions to study moral judgment. Madeline Thomas (1937) applied the method to clinical settings.

Story and Sentence Completion Techniques - . definition: a verbal stimulus containing words that represent either the

Sentence Completion - Directions. in this type of question you are given a sentence with one or two words missing.below

Sentence Completion Strategies - . tip #1: “blank”. before you look at the answer choices, read the sentence,

The 3-sentence story - . summarizing your story to its main elements. the elevator pitch. imagine you are in a lift with

The Seven Sentence Story - . sentence one: . long ago, in a magic garden, where the sun always shined, lived a happy

Critical Reading Part 1: Sentence Completion - . statistic. the 19 sentence completions count for about ¼ of your verbal

The Twelve Sentence Short Story - . exposition: (2 sentences) on a humid, summer day in the hills of kentucky, jack and

SAT Sentence Completion (SC): A Five-Step Method - . based on spark notes guide. 5 steps. spot the switch go with the

8.2 Sentence and Sentence Fragments Objective: - . -to identify subjects and predicates and to recognize complete