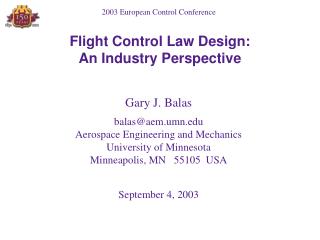 Control Design and Implementation of a Small-Scale Autonomous Hovercraft - . university of massachusetts lowell james b.

Aerospace Engineering - . by patrick ferrell. aerospace engineering is the main branch of engineering concerned with the

12. Control Design Based on Transient Response Criteria - . in this chapter, we consider the selection of pid controller

FLIGHT MECHANICS Exercise Problems - Problem 4.1. consider the incompressible flow of water through a divergent duct. the