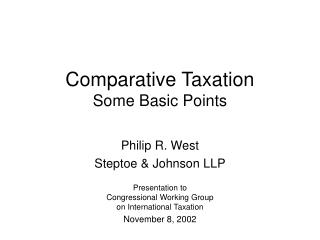 Comparative Taxation Some Basic Points. Philip R. West Steptoe & Johnson LLP Presentation to Congressional Working Group on International Taxation November 8, 2002. What makes one system better than another?. Economic efficiency : Is it good for the economy?

International Trade - . outline how open is the u.s. economy? patterns and trends in international trade gains from

Economics: Unit One - . the s ocial science for the socially awkward. unit one: basic economic concepts. everybody faces

INCOME STATEMENT - . lipana.ocampo.uy. income statement. reports on the performance of the firm and explains some, but

The Free Trade/ Fair Trade Debates - . conflict over theory &amp; practice. theory of free trade. what? in a system

Absolute Advantage - . international trade. the law of absolute advantage states that each country should specialise in

Cost and Time Value of $$ - . prof. eric suuberg engineering 90. cost and time value lecture. what is our goal? to gain