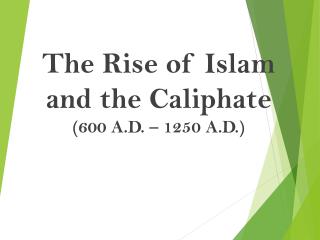 LESSON 25 BYZANTINE EMPIRE: FROM LEO THE ISAUREAN TO THE EAST WEST SCHISM - . i. political and military history 717-1054.

The Zulu and Sokoto Caliphate - . emma verstraete ap world history 7 th hour. discuss the process by which the zulu and

History and Religions of the Middle East - . early civilizations, centuries of turmoil, and islam, judaism, christianity.

The Abbasid Caliphate - . by chasity hale. caliphates. caliphate is a form of government ruled by a caliph and/or

The Abbasid Caliphate - . by andrew follmann and matthew albrecht. map of abbasid caliphate. this here is a map of the

The Abbasid Caliphate - . by andrew follmann and matthew albrecht. map of abbasid caliphate. this here is a map of the