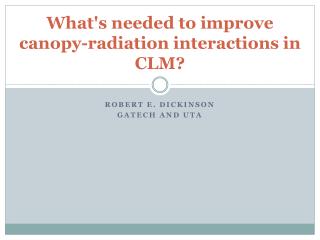 What's needed to improve canopy-radiation interactions in CLM?. Robert E. Dickinson Gatech and UTA. Define issue Summarize recent papers. What’s wrong with that currently in CLM?. Radiation designed for treatment of a homogeneous canopy but Many if not most canopies are heterogeneous. Radiation in a Radioactive World - . nuclear physics and engineering by: douglas osborn. is this what you think when i

Talking about Radiation Dose - . l 2. answer true or false. the radiation dose a patient gets in catheterization