How Would You Teach It? - PowerPoint PPT Presentation 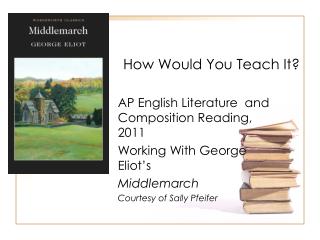 How Would You Teach It?

How Would You Teach It?. AP English Literature and Composition Reading, 2011 Working With George Eliot’s Middlemarch Courtesy of Sally Pfeifer. He Said…..She Said. or didn’t say, as the case may be. Important Background.

How Would You Teach It? Teaching With Urgency Without Teaching to the Test Handouts - Handouts to go with slides for the presentation, teaching

ET01 Introduction to Teaching - . lesson planning. aims and objectives. to introduce a systematic approach to planning

Models of Learning - Tools for Teaching - . we learn…. reflective questions:. what is your learning style? what is your

Strategies for Successful Student Teaching - . chapter 6. how does planning relate to effective teaching?. the ability

How might a teacher go about planning a unit/lesson when give a topic to teach? - So you have to teach about genetic

Co-Teaching? What’s That? - . julie hunter. co-teaching? are you crazy? i have no idea what that is!!!. co-teaching

Teaching Culture - . what do you think?. culture is a difficult term to define, because it includes so much. in your own