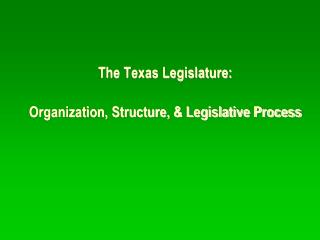 Policy, Budgeting and Oversight: The Role of the Legislature in Uganda - . ishmael m magona ministry of finance, planning

The Texas Legislature - . historical information. meets every 2 years for 140 days has come from democratic, rural

The Legislative Process in Texas January 2011 - . participating in the legislative process. there are a number of ways

Legislative History Research - . florida coastal school of law library. why do we need to research legislative

TEXAS ARTS ADVOCACY DAY - . texans for the arts will kick off the start of the 81st texas legislature and tfa 2009