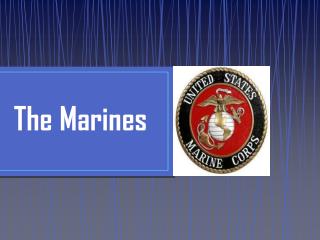 The Marines. The different jobs of a marine(not all). Engineer Technician Soldier Vehicle/Aircraft Engineer Some of the everyday jobs of a civilian are actually used in the marines. How the marines work. Join The Marines - . i plan on joining the marines and becoming a tactical sniper i am going to graduate college and go

Marines - . by drew davis surprise inside, guess what's inside. a physical description. the marines are really wet and,

Marines - . by: sherwin hunt. marines career. i would finish my school get good grade to past and move up and sign up to

Marines - . by adam. the few the proud the marines. what do you know about the marine corps?. the marines are the oldest

The Marines Department of the Navy - . semper fidelis “always faithful”. “our purpose is our promise”. first line

FINANCE FOR MARINES - Bluf. what this brief is not:mandatorya get rich quick plana pitch for any particular stock, mutual

Mitch Behm: Time in the Marines - Mitch behm owns and operates behm consulting services in lakewood, colorado. he has

Metro Atlanta Young Marines - . pledge of allegiance “i pledge allegiance to the flag of the united states of america