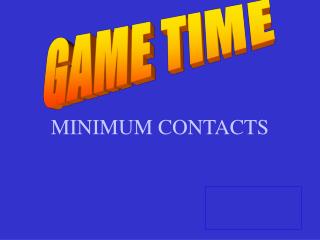 GAME TIME - . by rows . purple row. who made you? . yellow row. name something that god made. . orange row. bible verse

time bomb game - . time. bomb. time bomb!. 1. don’t throw the bomb!. listen to the question. pass the bomb around until

Review Game Eureeka Time - . get a board calcium carbonate cylinder wipey thing partner if viewing on the internet: get a

Welcome to Game Time - . click here to start. be ready…. about

Real Time Game App - My4faces - For the top freest real-time game apps, you could do a lot of inferior quality than

Mood board for Game Time - . by sam loftus. images. the font cover large image . with i’ll have to re-create. some

It’s Time To Change The Game - . grow-california: connecting business with opportunity. our mission is to foster jobs

Prime Time 1.3: The Product Game - . 1.3 the product game. define: multiple : a number is the product of that number and

It’s Time for a Trivia Game - . how much do you know about islam?. q. what does the word “islam” mean?. prayer

Introduction to Game Time Jesper Juul - . brought to you by veronica zammitto. a theory of time in games. most computer