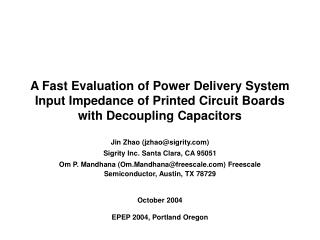 PCB Design for 1 Gbps - . ece 4006 dr brooke. overview. what signals are being routed? how can you route those signals?

IPC DESIGNERS COUNCIL - . how can we help you and your local chapter be successful?. agenda. ipc history overview

Resonant Circuit - . the behavior of the series rlc circuit is governed by the impedance. magnitude and phase. series

Capacitors as Circuit Elements - . the most common use of capacitors is in electric circuits. they are used primarily as

Capacitors - . ap physics. capacitors. what are they? a device that stores electrical potential energy by storing charge.