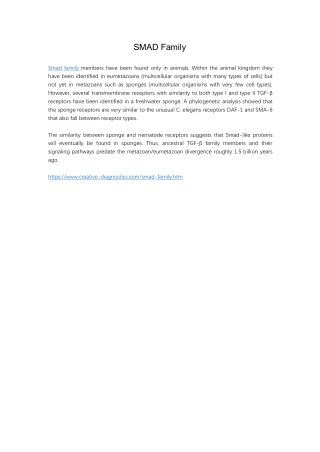 Smad family members have been found only in animals. Within the animal kingdom they have been identified in eumetazoans (multicellular organisms with many types of cells) but not yet in metazoans such as sponges (multicellular organisms with very few cell types). However, several transmembrane receptors with similarity to both type I and type II TGF-u03b2 receptors have been identified in a freshwater sponge. A phylogenetic analysis showed that the sponge receptors are very similar to the unusual C. elegans receptors DAF-1 and SMA-6 that also fall between receptor types. The similarity between sponge and nematode receptors suggests that Smad-like proteins will eventually be found in sponges. Thus, ancestral TGF-u03b2 family members and their signaling pathways predate the metazoan/eumetazoan divergence roughly 1.5 billion years ago.

What is a Family - . we will explore the different types of families…. a family is… . an individual or group of

Jennifer’s Family Symbols - . life with my family. my family and i went to marine world and we ate on a picnic table. i

Family Forms and Configurations - . adoptive family. one that accepts the legal responsibility of raising a child or

MY FAMILY - . my family. i want to tell you about the very strong and friendly family in the world. we are 6 in our

Family - . by clare, sydney, jana, and malik. what is family?. family is defined as a group of people who are related by

Family Life cycle - . today i will learn different aspects that make up a family. . what do you think of when you think

The Family - . sociology. lesson outline. what is the family? diversity in families sociological perspectives on the