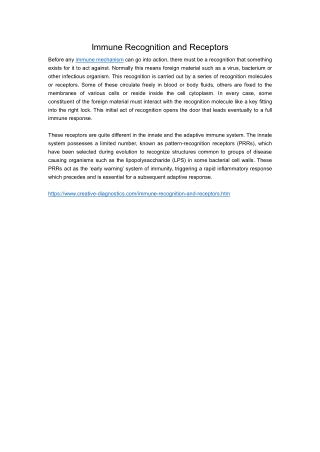 Before any immune mechanism can go into action, there must be a recognition that something exists for it to act against. Normally this means foreign material such as a virus, bacterium or other infectious organism. This recognition is carried out by a series of recognition molecules or receptors. Some of these circulate freely in blood or body fluids, others are fixed to the membranes of various cells or reside inside the cell cytoplasm. In every case, some constituent of the foreign material must interact with the recognition molecule like a key fitting into the right lock. This initial act of recognition opens the door that leads eventually to a full immune response.

These receptors are quite different in the innate and the adaptive immune system. The innate system possesses a limited number, known as pattern-recognition receptors (PRRs), which have been selected during evolution to recognize structures common to groups of disease causing organisms such as the lipopolysaccharide (LPS) in some bacterial cell walls. These PRRs act as the u2018early warningu2019 system of immunity, triggering a rapid inflammatory response which precedes and is essential for a subsequent adaptive response.
https://www.creative-diagnostics.com/immune-recognition-and-receptors.htm

Receptors of the ANS Named after nerve types that innervates them - Cholinergic receptors: the receptors on which ach

RECOGNITION OF TROUBLE - . no doubt of a system in trouble interconnections upper level susceptibility biomagnification

An integrated model of the recognition of Candida albicans by the innate immune system - . nature reviews / microbiology

Immune System Part II - . b cells have surface receptors also but the receptors are igm and igd. one b cells may have