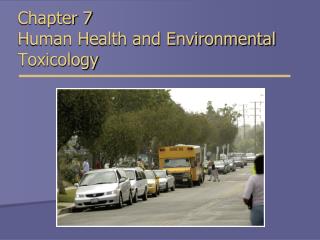 3. Toxicology is used to determine a. the classification of a pathogen. - 1. which of the following pollutants is used

TOXICOLOGY - . for english speaking students. definition. the study about the nature and mechanisms of chemicals´

Principles of Environmental Toxicology - . every day interactions with our surroundings. basic definitions:. toxicology.

Environmental Health - . what is the relationship between the health of the planet and our own health?. types of

Chapter 8 Toxicology: Poisons and Alcohol - “all substances are poisons. there is none which is not. the right dose