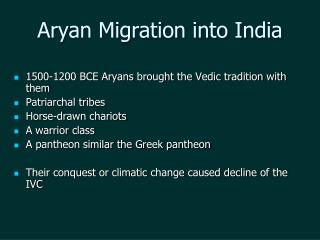 Aryan Migration into India. 1500-1200 BCE Aryans brought the Vedic tradition with them Patriarchal tribes Horse-drawn chariots A warrior class A pantheon similar the Greek pantheon Their conquest or climatic change caused decline of the IVC. The Vedic Tradition.

INDO -ARYAN MIGRATION - . aryans were the indo-european migrants who moved to south-east asia around 2000 bc. what were

Muslim Expansion into India - . dehli sultans, mongol invasions, and the mughal empire. empires of south asia. during the

AIM : How did the Aryan migration effect the settlers of the Indus Valley? - Do now : agree or disagree – everyone has

Aryan Selective Breeding - -(the sun wheel is used as the symbol of the aryan race). by ramandeep sandhu and joey nario.

Migration into the UK - . key question: what makes people undertake long and dangerous journeys to the uk?. learning

Effects of the Aryan Migration - . the vedas. a collection of poems, hymns, myths, and rituals that were written by aryan