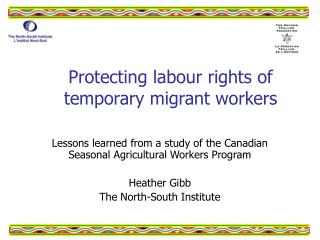 MIGRANT WORKERS AND FORCED LABOUR - . modern forms of fl. linked to the processes resulting from globalisation, have

Migrant Workers - . during the 20th century, hispanic americans — the majority of whom were mexican americans — made

Migrant Farm Workers - . a day in the tomato fields immokalee, florida. workers are typically picked up at a local market