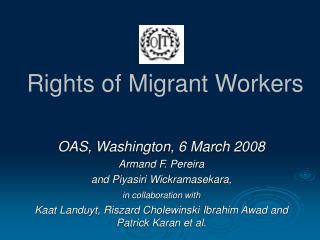 Protecting labour rights of temporary migrant workers - . lessons learned from a study of the canadian seasonal

Migrant Workers - . during the 20th century, hispanic americans — the majority of whom were mexican americans — made

Migrant Farm Workers - . a day in the tomato fields immokalee, florida. workers are typically picked up at a local market

Invisibility of Mexican Migrant Workers - The poisoning of indigenous migrant women workers and children: from deadly

Workers’ Rights - . stand up for what matters. message from scott travers, society president. what is

Migrant Workers in Romania - . migrant workers – legal aspects. foreign citizens from the eu/eea are able to work in