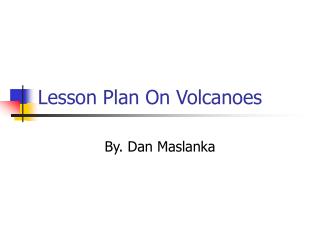 Lesson Plan On Volcanoes. By. Dan Maslanka. Intro. To Volcanoes. In a few minutes we will watch the video, Volcano!. Let’s first begin with some basic questions and write them on the board to be discuss What is a volcano? Where are they found? Why do they erupt?. Basic Makeup of The Earth.

Thinking &amp; Working Like A Scientist 8 th Grade - . w hat characterizes science and its methods?. science- is the

Volcanism - . the word volcano comes from the little island of vulcano in the mediterranean sea off the coast of sicily.

Hawaiian Luau Lesson - . in order to appreciate a hawaiian luau, it helps to know a little bit about the geography,

Volcanism - . volcanism. volcanoes are fueled by magma. once magma forms, it rises towards earth’s surface because it

Small Steps to the Lesson Plan - . march 11 or march 16: thinking sheet due for class check (add to syllabus; meet with