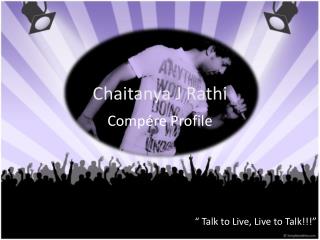 Chaitanya J Rathi. Compére Profile. “ Talk to Live, Live to Talk!!!”. What is a Compére. Chaitanya promoters and developers - Is a real estate firm based in jabalpur madhya pradesh. the firm provides services

Life and Teachings of Chaitanya - . part ii. attraction for hearing. everyone likes to hear or remember about others