Loess (silt) is what gives the Yellow River (above) its name and its color. - PowerPoint PPT Presentation 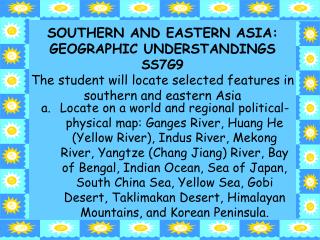 Loess (silt) is what gives the Yellow River (above) its name and its color.

1 / 130
Loess (silt) is what gives the Yellow River (above) its name and its color.
259 Views
Download Presentation Loess (silt) is what gives the Yellow River (above) its name and its color.

Color and Texture Ch 6 and 7 of Shapiro - . how do we quantify them? how do we use them to segment an image?. color

Southern and Eastern Asia - . the yellow river or huang he is the second-longest river in china (after the yangtze river)

* Color Theory - . the art and science of color interaction and effects. rgb additive color color created from beams of

Color - . color -. the visual response of the eye to reflected rays of light element of design 3 dimensions hue value

What is a River System ? - . a river and all of its tributaries tributary: streams and smaller rivers that feed into a

Flashing Yellow Arrows for Permissive Left Turns – Is It for You? - . presented by: bruce e. friedman, p.e., ptoe