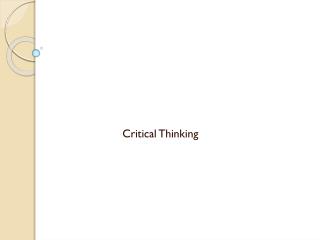 Critical Thinking . Critical thinkers use reasons to back up their claims. What is a claim? A claim is a statement that is either true or false. It must ALWAYS have a truth value (although we do not always have to know if it is true or false). Here are some examples of claims: Sometimes the Technology, but Always the Thinking - . your reflection / recall sheet what i did my thoughts on that dr