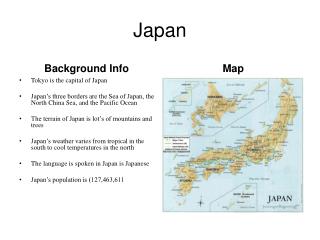 Japan. Background Info. Map. Tokyo is the capital of Japan Japan’s three borders are the Sea of Japan, the North China Sea, and the Pacific Ocean The terrain of Japan is lot’s of mountains and trees Japan’s weather varies from tropical in the south to cool temperatures in the north