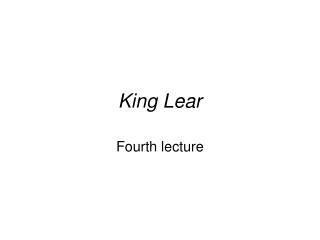 King Lear. Fourth lecture. Endings. Strange to say, King Lear hasn’t always ended with the almost unbearable ending Shakespeare assigned it. In the late 17 th cent. Nahum Tate, a poet and theater director, produced a version of the play that ended happily, with a romance-like conclusion. King Lear - . lear as a tragic hero. generally a respectable ‘good’ man. lear is the king he has the respect of

King Lear - . d.k. lee. giving away land starts conflict. king lear, in britain retires and decides to give up the land

King Lear - . act iv notes. act iv, scene 1. heath—edgar says he is ready to reveal himself but he sees his blind

King Lear - . sight and blindness. ‘see better, lear’. the importance of seeing yourself and the world clearly is