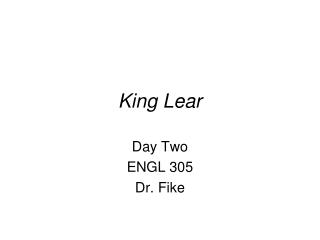 King Lear. Day Two ENGL 305 Dr. Fike. Papers. Please number your pages and paragraphs and underline your thesis statement. Make sure that your Works Cited page is attached. Your paper should be properly stapled. Papers will be returned one week from today. The “Sight Pattern”.

King Lear - . lear as a tragic hero. generally a respectable ‘good’ man. lear is the king he has the respect of

King Lear - . d.k. lee. giving away land starts conflict. king lear, in britain retires and decides to give up the land

King Lear - . act iv notes. act iv, scene 1. heath—edgar says he is ready to reveal himself but he sees his blind

King Lear - . sight and blindness. ‘see better, lear’. the importance of seeing yourself and the world clearly is