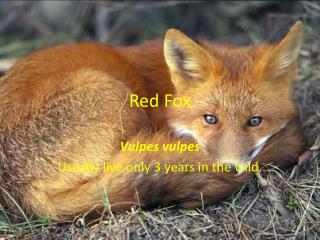 Red Fox. Vulpes vulpes Usually live only 3 years in the wild. Identification. Small dog-like mammal Pointed face and ears Lightly built body and long fur The tail is one third of the length of the fox Males are slightly larger than females Foxes are larger the farther north they hunt. Red fox - . by christopher and kyle. what does it look

Red Fox - . by: sam ferrenburg. at birth usually brown or gray new red coat grows in by end of first month are weaned at

R ockin red fox - . by hailey sanchez. what is a red fox?. this is what a red fox look like. a fox is red and has a white

Red Fox Hotel, Bhiwadi - Welcomes you with its fresh bold interiors as well as crisp and clean rooms. this economy hotel

Wild in Pennsylvania Red fox - . by brandon roling. introduction. do you like red foxes? well i'm going to tell you

Fox - . by kody. fox. foxes can live almost everywhere in the world. they are found in farmlands, deserts, forests, and