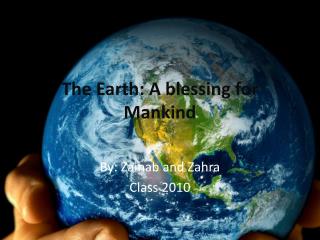 The Earth: A blessing for Mankind. By: Zainab and Zahra Class 2010. The Millennial Generation : A Blessing or Curse for the Workforce - . terri manning bobbie everett cheryl roberts. a

Navajo Blessing for a Newborn Child - . &quot;today, we are blessed with a beautiful baby may his feet be to the east

A FATHER S BLESSING - I love you; i'm proud of you; i believe in you, andyou're a. but thanks be to god. he gives us the

Blessing - . imtiaz dharker. key teaching points: to read the poem to consider how the poem presents people and their way

A Celebration of Blessing - . the family federation for world peace-- blessing 2000. it all starts with the family. where

Blessing - . imtiaz dharker. before reading the poem:. think about a typical day. how many times do you use water? what

Blessing the Difference - . the evangelist as “sanctuary”. a basic question for any relationship: “can i truly be

Kenya the Cradle of Mankind - . written and researched by: anthony salemi and david thacker.

The Blessing of a Birthright - . he would receive the chief blessing (gen. 27:1-46) entitled him to a double portion of

Early Mankind - . australopithecus afarensis. lived between 3.8 and 3 million years ago it is the best known early human

How the Earth and Mankind were Created - . the origins of the gods the top 12 of olympus. creation of the world. from

‘Blessing’ - . l.o: to be able to understand the context of a poem, and extract the themes. key teaching points: to

Africa – The Blessing of a Hundred Years - . slides prepared by chris maynard 2011-08-04 chart and maps from “atlas

Blessing - . imtiaz dharker. learning objective:. how many times do you use water? what for? imagine if you had no

“A Blessing” - . practice with imagery. “a blessing”. read “a blessing” on pg. 405 comprehension and analysis

The Creation of Mankind - . the finger of god. the fall of mankind. what is man that you are mindful of him, and the son

Ceramics for Service to Mankind - . mendeleev university of chemical techonology of russia. mr. vlassov department of