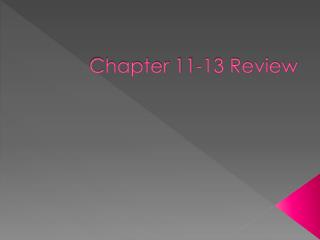 Chapter 11-13 Review. 1. Which aboriginal groups lived in Western Canada?. The Cree, Ojibwa, Dene , Beaver and Slave - Hunters and gatherers Blackfoot, Gros Ventre – Buffalo hunters 2. What was the role of the Cree and Assiniboine in the fur trade ?

Chapter 5 QuickCheck Questions - . quickcheck 5.2. be sure to study/review vector river lab. be sure to review hooke’s

Chapter Three Review The English Colony Edition - . **1. why was the toleration act of 1649 significant to america’s

Chapter 23 Review - . the paleozoic, mesozoic, and cenozoic eras. when there is no tectonic activity along the edge of a

Law Chapter 1 Midterm Review - . by: marshall higley and alex felt. the power to decide a case is termed. fiat the long

AP PSYCHOLOGY Review for the AP Exam Chapter 5- - . sensation chapter 5. sensation *a process by which our sensory

Chapter 24 Short Answer Exam Review - . the author of the theory of relativity . einstein. just prior to ww1, the

Chapter 1 - . the problem and review of literature and studies. the title of the study / research