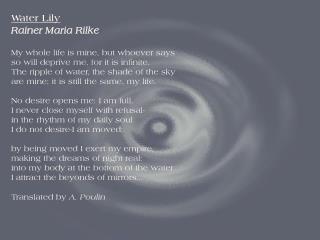 Water Lily Rainer Maria Rilke My whole life is mine, but whoever says so will deprive me, for it is infinite. The ripple of water, the shade of the sky are mine; it is still the same, my life. No desire opens me: I am full, I never close myself with refusal- Rainer Rilke - Have unraveled the stories of god by rainer rilke? check out the translated essays in english from this